In January 2006 the choir performed Mahler’s Second Symphony with the Rai National Symphony Orchestra in the inauguration concert to celebrate the restoration of the orchestra’s Arturo Toscanini Auditorium in Turin. 2007 and 2008 saw performances in the annual Christmas Concert in the Saint Francis Basilica of Assisi, a RAI production that was broadcast on Eurovision. In March 2008 the Maghini Choir participated in the 47th Semana de Música Religiosa in Cuenca (Spain), performing Britten’s War Requiem and Verdi’s Messa da Requiem. In 2011 the Choir participated in the MA Festival Brugge (Belgium), in 2012 and 2013 in the Innsbruck Festival of Early Music (Austria). 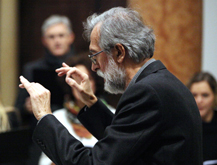 Read the reviews of our Concerts